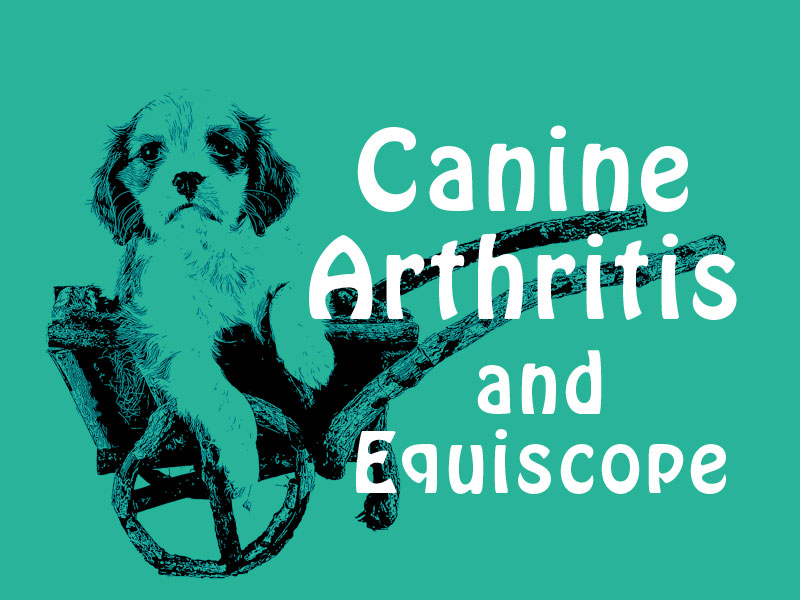 Has your dog received a diagnosis of canine arthritis, canine skeletal disorder, or some other musculoskeletal disorders? Are you’re finding the solutions aren’t working? Then you’re in the right place. Equiscope Therapy may be just what you’re looking for.

What is the best plan to help dogs with arthritis and musculoskeletal disorder?

Most traditional practitioners consider these conditions as progressive, not curable. Canine arthritis management plans often include:

At their worst, these conditions often involve medications, invasive surgeries, and euthanasia.

No one wants to go through this with their best friend. But we know that your bond with your dog is a unique one and that you’ll do whatever you can to relieve their pain and give them their best life.

So what if we told you there’s another, non-invasive drug-free option that’s been around for decades?

We’re talking about the Electro-Equiscope. However, before we get into the science of Equiscope technology, let’s talk about Zooey.

Zooey is a five-year-old Cavalier King Charles who was the runt of her litter. Like most Cavaliers, she was small and feisty. What made her different was that at birth she had a malformed skull. This was causing spinal fluid to collect above her top vertebra.

Unfortunately, when she was barely two years old, she and her humans were out walking after a rainstorm. She slipped on the wet grass and hit her head on the side of a berm. Twenty-four hours later, she was rushed to the ER, paralyzed from the neck down.

As a result, her options were: Put her down (recommended by the Vet) or attempt a ground-breaking surgery and hope for the best. Her humans couldn’t stand the thought of euthanizing Zooey, so they chose the surgery.

But the recovery was significantly more complex than they expected. It included eight weeks of round-the-clock care and six months of physical therapy, water therapy, and acupuncture.

Over time, she started wagging her tail, started crawling, and walked with a swagger. Desperate to get the last 20% of Zooey’s mobility back, her humans found an Equiscope practitioner.

After five sessions, she now walks and runs with increasing confidence. She’s started acting like a dog again, taking pleasure in the smells and distractions of life. This little 12-pound fluffball feels so much better that she’s started challenging her older (and bigger) sister for the alpha slot at home! 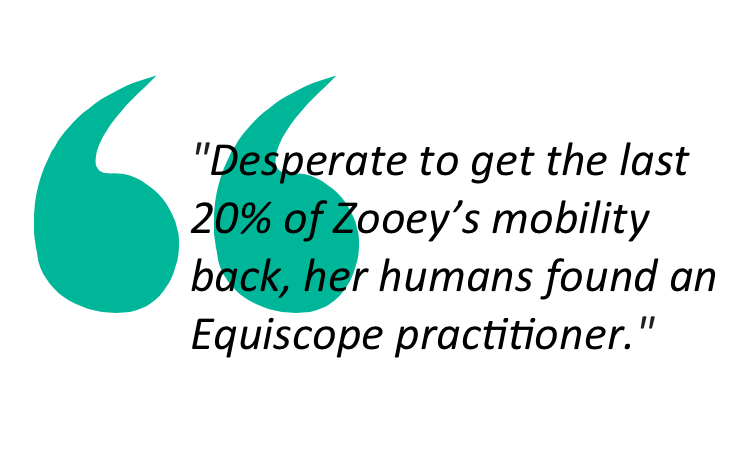 So Just What is Equiscope Therapy?

Electro-Equiscope® technology is an advanced electro-therapy technology. It has consistently proven its effectiveness for pain relief and reducing inflammation in any area of the body.

In canine arthritis management, the Electro-Equiscope scans your dog’s nerve and connective tissues. It’s looking for cells that are damaged or have “drained batteries.” The device receives information from the dog’s tissue using its sophisticated feedback modulator. Four computers process that information. They then deliver a precise output of absorbable electrical current. These low levels of currents travel to the damaged or dead cells and correct abnormal electrical patterns. This restores cellular homeostasis or balance, and allows cells to start the healing process. Healing can occur quickly and even permanently.

The Story of Dakota’s Canine Arthritis

Dakota is a 105-pound, 12-year-old Akita. When he and his mate, Roku, aren’t protecting the yard from coyotes, they’re snuggled up with their human family. During a routine visit, x-rays confirmed arthritis in his right hind end. Unfortunately, when he came out of anesthesia, he also experienced limited mobility on both hind limbs.

The Vet gave him a dose of steroids with little to no improvement. Luckily, his human family knew what to do. They quickly began Electro-Equiscope protocols with an Equiscope practitioner. After the first protocol, Dakota was able to walk unassisted. After a series of 12 Equiscope sessions over five weeks, he was able to run up and downstairs again and is back to protecting his yard with Roku.

Do you think your best friend could benefit from Equiscope Therapy?

Intellbio (Intelligent Bioenergetics) is the exclusive distributor of the Electro-Equiscope, with providers all over the country. Find a practitioner today!

Summary
Article Name
Equiscope Therapy Helps Canine Arthritis – and More
Description
We show you the story of two dogs who found help for their problems with an Equiscope professional, improving canine arthritis and a musculoskeletal issue.